The Magyar Nemzeti Bank (Hungarian National Bank) has issued a cupro-nickel collector coin with a face value of HUF 1,000 in honour of the successful launch into orbit of MASAT-1, the first Hungarian satellite. The collector coin is the eighth of a series of coins presenting the technical innovations and inventions of Hungarian engineers and inventors. 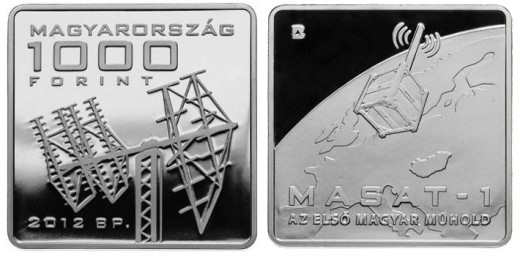 The collector coin was designed by Áron Bohus. The obverse of the coin bears a stylised representation of a ground antenna capable of receiving the signals of MASAT-1. The inscriptions ‘HUNGARY’ (in Hungarian), the value numeral ‘1000‘ and ‘FORINT’ appear above the representation of the antenna. Below it, the mint year ‘2012’ and the mint mark ‘BP.’ are shown.

The reverse of the coin features a stylised representation of MASAT-1 in operation. In the background is a detail of the earth with Europe as viewed from space, showing the raised map of Hungary. The inscriptions ‘MASAT-1’ and ‘THE FIRST HUNGARIAN SATELLITE’ (in Hungarian) appear below the representation of the satellite. The initials of designer Áron Bohus are in the upper left corner of the coin. 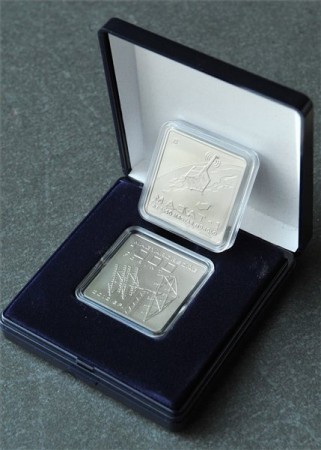 The collector coin can be purchased from 12 April 2012 at the coin shop of the Hungarian Mint in the Magyar Nemzeti Bank’s Visitor Centre (8–9 Szabadság tér, Budapest) and on the Mint’s website (www.penzvero.hu).