The Magyar Nemzeti Bank (Hungarian National Bank) has today issued a silver collector coin ‘Hungarian Folk Dance House Method’ with a face value of HUF 3,000 on the occasion of the addition of the Hungarian method of teaching folk dance to the UNESCO’s World Heritage List. 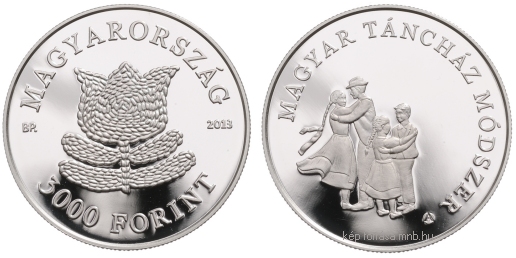 In 2011, the Folk Dance House Method, the Hungarian model of passing a cultural heritage from one generation to another, was added to the UNESCO’s list of best practices aimed at preserving the intangible cultural heritages of mankind. A certificate in recognition of the event was awarded to the movement in 2012. To commemorate the occasion, the MNB has decided to continue its ‘Intangible Cultural Heritage’ series and to issue the ‘Hungarian Folk Dance House Method’ collector coin. The Bank launched the series in 2011, when the Busó Festivities at Mohács were added to the UNESCO’s representative list.

The second coin of the series was designed by metal artist András Szilos.

On the reverse of the coin, couples in national dress are dancing with their arms around each other. On the edge, the reverse is inscribed with the circular legend ‘HUNGARIAN FOLK DANCE METHOD’. The initials of designer András Szilos feature down to the right.

4,000 pieces of the collector coin are produced in special proof finish.

The collector coins are sold by the Hungarian Mint. They will be available to buy at the coin shop of the Hungarian Mint in the Magyar Nemzeti Bank’s Visitor Centre (8–9 Szabadság tér, Budapest) and in the webshop on the Mint’s website (www.penzvero.hu) from 28 February 2012. Many collector coins produced from gold, silver and non-ferrous metals issued earlier are also on sale in the Mint’s webshop.