The Hungarian National Bank has issued a silver collector coin with a face value of HUF 5,000 to commemorate the 125th anniversary of the birth of sculptor, coin designer and plaquette artist József Reményi. The coin has been issued as part of the Europa Coin Programme. 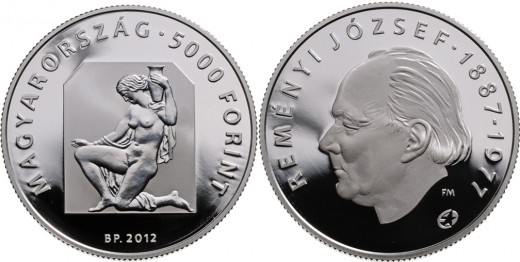 József Reményi (b 23 January 1887, Kosice, d 25 December 1977, Budapest) was one of the most outstanding figures of 20th century Hungarian coin artistry, who, together with Fülöp Beck, elevated the genre to an art form and to international rank.

The Reményi collector coin was designed by Mihály Fritz. On the obverse, the upper legend ‘MAGYARORSZÁG’, the value numeral ‘5000‘ and the inscription ‘FORINT’ are inscribed along the rim of the coin, separated from each other by circular dots. The centre of the coin features the representation of a rectangle shaped plaquette, with its corners cut off. It is an allusion to the central female figure of the Danaides, one of the characteristic motifs on the reverse of coins designed by József Reményi. Below the representation of the plaquette, the mint mark ‘BP.’ and the mint year ‘2012’ are arranged in two horizontal lines.

The reverse of the coin bears the portrait of the old József Reményi. The upper legends on the rim read ‘REMÉNYI JÓZSEF’ and ‘1887-1977’, separated from each other by circular dots. The initials of designer Mihály Fritz and the Euro-star logo, indicating that the coin was issued as part of the Europa Coin Programme, are positioned below, to the right of the portrait.