The Hungarian National Bank has issued a silver collector coin ‘Árpád Tóth’ with a face value of HUF 5,000 to commemorate the 125th anniversary of the poet’s birth. 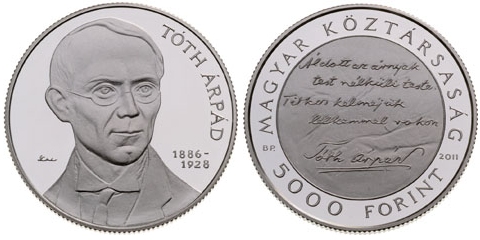 The collector coin was designed by Márta Csikai. On the obverse, the edge bears the legend ‘REPUBLIC OF HUNGARY’ on the upper part, as well as value numeral ‘5000’ and the inscription ‘FORINT’ on the lower part. The mint mark  ‘BP.’ and the mint year ‘2011’, both positioned horizontally on the left edge of the collector coin, separate the upper and lower legends. The centre of the coin features a four-line quote from the poem ‘Az árnyból szőtt lélek’ (Soul Woven of Shadows) by Árpád Tóth, represented as a manuscript detail on a slightly crumpled sheet of paper. Below the quote, the coin bears the signature of Árpád Tóth.

The mintage limit is 6,000 pieces, of which 4,000 pieces are produced using the special proof technology.